The Only in Seattle team would like to thank the business district managers, City colleagues, BIA representatives, business owners, and all attendees that joined the summertime lunch social at Tai Tung on Wednesday, 8/29. Over 45 attendees from all throughout Seattle attended to connect, listen to Special Events Chair Chris Swenson speak about upcoming engagement opportunities regarding the special events cost recovery model, and eat delicious food from Tai Tung; those egg rolls were delicious! A very special thank you to third generation business owner, Harry Chan and his family for hosting us and providing the food. Don’t forget to think about them for your next event, or dinner outing, and compliment them on their new sign, courtesy of SCIDPDA, and OED.

Only in Seattle Request for Applications: The Only in Seattle team announced the upcoming 2019 Request for Applications (RFA) release date of mid-September (check our website for updates). The OIS team is hoping to give applicants at least six weeks to complete the application and consult with staff for questions and support. The RFA will be due on Monday, October 29 and will include a draft code of conduct for inclusion in 2019 awardee contracts. We are asking for feedback on the OIS RFA process and the code of conduct (attached). Take the survey today!

Special Events Chair Announcement: In Chris Swenson’s brief presentation, he mentioned resources, including the Special Events Permit Fees, Process and Policy Feedback handout, and the October 25th seminar, “Learn How You Can Take Your Event To The Next Level And Be A Part Of The Vision Of The Changing Landscape of Special Events,” produced by the Washington Festival and Events Association. Chris will also be reaching out to those that indicated they are interested in engaging with the Special Events committee directly to provide input to the City’s special event fee structure and process. You can also follow up with Chris directly at chris.swenson@seattle.gov. Thanks again, Chris for your thorough presentation!

We look forward to seeing you at the next peer networking event in September. Sign up for the OIS eNewsletter and read the Bottom Line blog for the latest on the next Peer Networking events, RFA information and more.

Thank you again to all the participants and check out photos from the event below (credit Wynn Barnard). 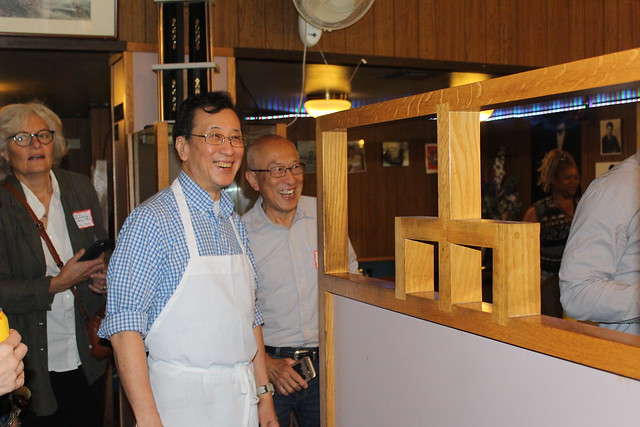 Adding to the educational and cultural landscape of Seattle, two universities will be opening their doors this month and will be hosting opening events to introduce themselves. Both Northeastern University’s Seattle Campus and City University of Seattle (CityU) open soon. It is an exciting time for Seattle in terms of growth, and the addition of two new institutions of learning to downtown give Seattle even more to be excited about.

City University of Seattle (CityU) is launching their flagship campus at 6th Avenue and Wall Street in January as well. CityU will host an opening on Friday, January 25 from 4:00 pm to 7:00 pm. CityU’s open house and dedication ceremony will feature remarks from Mayor McGinn and downtown Seattle Association chairman Jack McCullough among others, and will feature food by Tom Douglas, drawings for prizes, and of course, members of the CityU community.

Seattle is excited to see both Northeastern University-Seattle and CityU open their doors this month. Both opening events will be tremendous networking opportunities and good chances to learn more about these new educational institutions here in Seattle.

Managing yourself: A smarter way to network
Harvard Business Review
The old adage “It’s not what you know, it’s who you know” is true. But it’s more nuanced than that. In spite of what most self-help books say, network size doesn’t usually matter. Individuals who simply know a lot of people are less likely to achieve standout performance, because they’re spread too thin.

Food trucks 101: How to start a mobile food business
Entrepreneur
The industry is booming with approximately 3 million food trucks in the U.S., and more than 5 million food carts. From an entrepreneurial standpoint, mobile food businesses have a lower overhead and require fewer employees than restaurants and can be easily moved if one location does not generate enough business. Here’s a quick rundown of nuts and bolts of the food-truck business, including the basics for getting started.

Brownfields bloom in Seattle
Morning Star
In today’s Wall Street Journal, Seattle was highlighted as a hotbed for cleaning up abandoned — and often contaminated — industrial sites known as brownfields and redeveloping them for office buildings, shopping centers and other uses. Seattle’s brownfield boom is centered around the once-decaying South Lake Union district, where 6.4 million square feet of office, retail and residential space have been built on reclaimed properties since 2004, city officials estimate. Much of the work has been done by Microsoft Corp. co-founder Paul Allen’s Vulcan Inc., which says it has redeveloped 21 sites on about 60 acres in the district, including construction of a new headquarters for Amazon.com. Brian Surratt, Seattle’s business-development director, said so much development went into the district that it helped cushion Seattle during the last recession. “This was one of the bright spots,” he said.

The Multicultural Biz Wiz Conference, on September 9th, is the place to be to learn about small business resources and effective cross-cultural communications, while networking with other small businesses and thought leaders in our business community.

OED Acting Director Steve Johnson; Mayor of Bellevue Don Davidson; Javier Palmera, the Executive Producer at KUNS TV, the Univision affiliate in Seattle; Amrita Srivastava, the founder and principal lawyer of Auxilium Lawand; and Assunta Ng, the founder and publisher of the Seattle Chinese Post and Northwest Asian Weekly; are just a few of the speakers at this conference.

The conference will hold presentations on insightful topics regarding tools and resources for small businesses, multi-cultural prevalence in the world of business, and sales techniques.  View the rest of the presentation topics and the full schedule here.

Sponsors of the event include Opening Latino Doors, Sea Beez, the City’s Office of Economic Development, and Washington CASH.

To find out more about this informational event, please click here.

Join the United Indians of All Tribes Foundation Native PTAC for the Native Alliance and Veteran Business Conference and Tradeshow, which will be held September 8th-9th, 2010 at the Tulalip Resort Hotel & Convention Center in Tulalip, Washington. Open new doors to your share of the government marketplace by attending or exhibiting at this information-packed small business procurement conference intended to create an effective outreach environment for all small businesses!

Through networking, workshops and exhibits, attendees of this conference will make lasting connections leading to business development and strategic partnerships in the pursuit of the millions of dollars in federal government contracts awarded to small, Veteran and Native businesses.  The First Gentlemen Mike Gregoire and John Lee, from Washington State Veteran Affairs, will be speaking at the Wednesday, September 8th breakfast program, while many more speakers will be presenting throughout the conference, such as Greg Mowat from Sound Transit and Sara Manzano-Díaz, Director of the U.S. Department of Labor.

The event is predicted to have about 400 plus in attendance, the majority made up of small Native American and Veteran and Tribally owned businesses.

To find out more information about this event, please click here.

To find out more information about the United Indians of All Tribes Foundation Native PTAC, please click here.

Deadlines to register vary among exhibitors and attendees, but registration begins to close on July 31st.